I am currently seeking an agent for my two speculative fiction novels for adults: The Skin of a Selkie and The Wintering Place.   The Wintering Place was longlisted for the 2019 Mslexia novel competition and the 2018 Lucy Cavendish Fiction Prize.

My short stories have been published as follows:

The Beauty of the Beast

She went to him with trepidation, cowed by her father’s description of his beastliness and the thought of a creature so twisted with spite that he would demand such a price in exchange for the plucking of a rose.  But like all good girls, Beauty was burdened by a duty to right the wrongs of her parents, so she went willingly to the fate her father had created.

Published in issue 14 of Firewords magazine.  You can buy a copy here.

None of us saw it arrive.  When I’d last looked, there was an empty field, stubbled with the remains of the harvest.  Nobody could say who’d built it.  But there it stood: an old-fashioned carousel, lovingly painted with a tented roof.

Runner up in the Retreat West quarterly flash fiction competition in March 2021, this story was professionally recorded and you can read or listen to it here.

A gift of dreams

‘My food ran out days ago and there’s no prospect of rescue up here at the top of the world.  I try to put up my tent, but the arctic wind bludgeons and tears at the fabric.  My compass is gone, my GPS is behaving strangely and the whiteout obliterates the stars.  I no longer know which direction to walk in.  The next time I fall, I stay there, slumped in the snow, ready to give in to sleep at last.’

You can read this Christmas story, published on my blog in December 2018 here.

‘As I carry my suitcases to the door, the tide is already seeping onto the causeway.  I feel a moment of panic, knowing that soon I’ll be cut off from the mainland, but then I shake myself.  This is what I wanted, after all.’

Short-listed for the Fresher Short Story Prize 2018 and published in the competition anthology ‘Fresher Writing – Volume 4’.  You can buy a copy from the publisher here.

‘She was alone at the bus stop on Roseberry Road. It was the last bus of the night and I was tired and ready to go home. I had no other passengers and had hoped for a clear run. I remember thinking she wasn’t dressed for the weather. The pink mini-dress barely covered her limbs and the wind caused her hair to whip around her in dark ribbons. When she got on the bus, I could see the goose pimples on her arms.’

Published in the Cold Iron anthology, published by Iron Press, June 2017.  You can buy a copy at Amazon or through Inpress here.

‘As the lightning flowers bloomed, her fears fell away, one by one. Each new blossom and a worry faded.  The lightning strike made her fearless.’

Published in Issue 5 of Firewords Quarterly, October 2015.  You can buy a copy at http://www.firewords.co.uk/shop/issue5/

The girl I was

‘She offered me distant cities, food that I had never tasted and the echo of words in alien tongues, but I chose terraced streets, white satin and packed lunches.  I see her still, shivering in a print dress, the lake reflected in her eyes.  ‘I could be your muse,’ she said, as I snapped the sketch book shut, capturing forever the hope and challenge in her face.’ 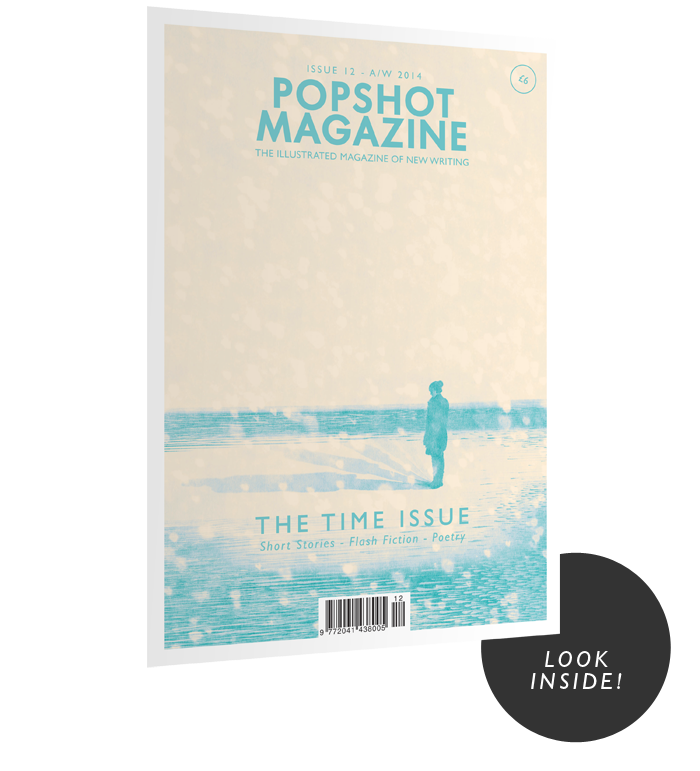 ‘The worst of it is the certainty that I will die, not someday or sometime in the future, but today.  This is the day of my death.’

Published in issue 12 (Autumn / Winter 2014) of Popshot magazine.  This story asks the question: if you knew exactly when you would die, what impact would this have on the way you lived your life?  The print version is now sold out but you can buy a digital version at http://www.popshotpopshot.com/.

The End of Hope

‘On the day the last polar bear died, people wept openly in the streets.  Strangers huddled together in groups, staring at silent TV screens in shop windows.  Employees came out of their cubicles and gathered at water-coolers, discussing the tragedy in hushed tones.  Men and women leaked onto the streets, wandering aimlessly with grief-stricken faces.  Traffic thinned out and came almost to a standstill.  After an hour, the mobile phone networks had gone down due to heavy use.  By the end of the day, there was a river of flowers propped up against the enclosure where the bear had lived.’

You can read the full story in the anthology – By the light of the moon, edited by Clare Morrall.

‘I was told, once, that the meaning of the word paradise is a walled garden.  In fact, paradise is a garden whose seasons change with the surfacing of a memory, the faint yearning of a time long gone.  And so, in the high blaze of summer, I might open my scarred back door to admit the scent of apples and wood smoke.  I can walk then, on a path painted gold with burnished leaves and feel myself enfolded by the expectant intimacy of autumn.  Wearied by the gloomy frigidity of too many winter days, I might sense the promise of spring germinating beyond the door.  I can strip my claustrophobic layers at the threshold, and slip out with airy steps, onto a lawn peppered with purple crocuses, in the dappled shade of branches jewelled with waxy buds.’

As this story wasn’t published, you can read the full story here.

This piece of flash fiction was published on the Sarah Potter Writes blog, where I was a guest storyteller in October 2014.  It was inspired by the activities of the Order of the White Feather, an organisation active in World War One, with the purpose of shaming men into enlisting by encouraging women to present them with a white feather.  You can read the story here.

The garden of lost ideas

You can read this piece of flash fiction about what happens to creative ideas when they are not used here.

The girl I was – shortlisted for Mslexia short story competition 2012

The Wintering Place – longlisted for the Lucy Cavendish Fiction Prize 2018

The Wintering Place – longlisted for the Mslexia Novel Competition 2019

39 thoughts on “Prizes and publications”